A thank you from your winner, Yannick 🏆🎉 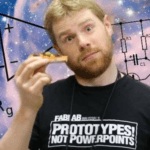 The overwhelming interest in Space and related subjects, particularly during the Covid pandemic when developments in medical sciences have been more in the spotlights than ever before, surprised me quite a bit.

The enthusiasm of students proves that the I’m an Engineer initiative is a fruitful recipe to keep students engaged with science and technology through novel channels. Especially at times when regular classes are suspended to keep the virus in check, the Chat sessions have been a welcome change in routine for both the students, and the engineers and scientists participating.

I’m very grateful to the I’m an Engineer crew and in particular the entire moderator team dedicating incredible amounts of time (and seemingly endless patience!) to moderate the discussions. I’d also like to extend my thanks to the UK Space Agency, UKRI, RAIN, and the countless universities, research institutions, and companies involved to have made giving the students this experience possible.

What made the Chat sessions so valuable was the opportunity for students to ask pretty much any question to a panel of scientists and engineers. An ungraded chat session where there are no ‘wrong’ questions, and where no subject is off-topic, creates a remarkably liberal climate where students are invited to ask the kind of questions they always wanted to know the answer to, but were afraid to ask in class. Whether aliens are real, for example (spoiler: yes, it is statistically extremely likely aliens do exist somewhere in the Universe!), or what the shortest path to becoming an astronaut is.

The dream of a career as astronaut is very much alive, and so is the fascination for space exploration. Recent successes, such as the landing of Philae on comet 67P, Voyager 2 actually leaving the solar system, and of course the media storm created by SpaceX and its charismatic founder, have not missed their effect to inspire.

Many questions were however fuelled by very serious concerns rather than mere curiosity. For example Freya wondered if it would be possible to clean up our own planet by sending non-recyclable waste into space, a very valid question and one that is certainly not easy to answer. Or when explained that the clouds produced by modern rockets are in fact just water vapour produced by burning liquid hydrogen, students wondered if it couldn’t be used as a water supply, and whether it’s responsible to launch them into Space while so many people on Earth don’t have access to clean drinking water. While engineers and scientists in the present wonder if they could, the next generation of engineers and scientists is apparently already wondering whether they even should.

Over the course of hours of discussions, it became very clear that youngsters anno 2020 are ready to talk about serious subjects and problems that affect their own future. This seems particularly true for topics that are left out at school. With Wikipedia at their fingertips it won’t be a surprise that the current generations of students are better informed than ever before, yet it is their engagement that struck me the most.

Students brought up complex issues such as overpopulation, climate change, or nuclear waste – none of which are easy to address through the written word within a 40-minute time slot. So when one critical student asked why so much time was spent talking about Brexit and so little on solving overpopulation, even scientists have to admit we don’t know what to answer…

After such in-depth discussions, I’m confident that youngsters are very much aware of the importance of science, technology, engineering and maths in what’s going to be their future. I believe all scientists and engineers who participated would agree that I’m an Engineer is a fantastic medium for a much-needed dialogue, and I can only hope it will materialise into a permanent and ongoing initiative in a post-Covid society.

One conclusion is certain: as long as youngsters are granted uncensored access to information, given the chance to ask the right questions, and can demand the right answers, we can look towards the future with confidence.

Posted on December 3, 2020 by modalex in News. Leave a comment